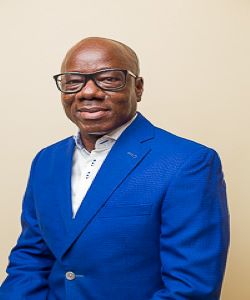 Dr. Draman has been actively engaged in Institutional, Parliamentary, Public Financial Management, Evaluation and Governance issues for the past fifteen years. He has carried out pioneering work with more than 30 Parliaments in Africa (including the Pan-African and ECOWAS Parliaments) and other Parliaments around the world. In 2004, he set up the Parliamentary Centre’s Africa Office in Accra, Ghana; set up the African Parliamentary Network on Poverty Reduction; and revived the African Parliamentarians’ Network Against Corruption (APNAC) with Secretariat based in Accra. Dr. Draman also set up the West African Association of Public Accounts Committees (WAAPAC) and currently hosts the Secretariat in Ghana. He conceptualized, developed and led the implementation of numerous multi-million dollar governance/parliamentary support projects; has conducted needs assessments of a number of Parliaments in Africa; helped a number of African Parliaments in their Strategic Planning; designed and delivered training to MPs and staff in the budget process; designed and delivered a number of training seminars for MPs on social accountability, financial oversight, oversight of the extractives sector and poverty reduction. He holds a PhD in Political Science from Carleton University and has taught courses on Development and Conflict at Carleton University and been a Guest Lecturer at Harvard University, Boston, MA. He has served as the Director of Africa Programs at the Parliamentary Centre between 2006 and 2013. He has also served as a Consultant for the Africa Branch and the Multilateral Programs Branch (Peacebuilding Unit) of the Department of Foreign Affairs, International Trade and Development (formerly Canadian International Development Agency, CIDA).

ACEPA is an African not-for-profit organization registered in Ghana. We are dedicated to building the capacity of African Parliaments and elected representative bodies in Africa and beyond the continent